A Kaddish for Theatre 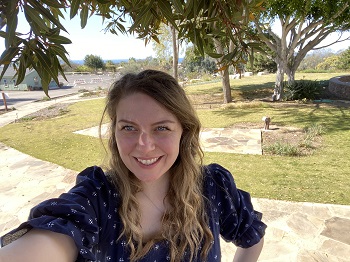 An actor called "line" and a playwright cried...
That sounds like the start to a bad theater joke. But it's what happened to me a few weeks ago, at our dress rehearsal for the Lipinsky Family San Diego Jewish Arts Festival's "A Drive Through Shushan," a drive-through Purim show at the Leichtag Foundation's farm in Encinitas.
It had been 362 days since I attended a live rehearsal for a play I had written. 362 days of staring through blurry eyes into the blue-light of my computer screen. 362 days of bingeing TV like a box of girl scout cookies. 362 days of avoiding saying the word theater like it was Voldemort. And 362 days of grief.
For the first several months (or years? or centuries?) of the pandemic, I was in mourning. I read about hospitals making Sophie’s choices between young and old, sick and healthy. I read about corpses piling up in bathrooms, in unrefrigerated trucks. I read about Ahmaud Arbery, Breonna Taylor, George Floyd; the systemic racism in our nation that allows Black people to be murdered with impunity. I witnessed a Jewish prayer group that got zoom-bombed by Neo-Nazis. I was afraid to go outside. Loss compounded on loss. It felt selfish to add the loss of live theater to our collective long list of grief.
But still. On March 21, 2020, I graduated with my MFA in Playwriting from UC San Diego. I had worked three years to achieve a degree in a field that was now indefinitely on pause. A world premiere of my play was announced and within days, indefinitely postponed. It felt selfish to grieve these comparatively minor losses when our world was grieving so much, but still, I was grieving.
As a Jew, the only way I know how to grieve is through saying Kaddish, the Jewish mourner's prayer, in community. In Jewish tradition, a quorum of ten people, called a minyan, is required for public worship, teaching us that we cannot rise to our greatest spiritual potential alone. We cannot fully express ourselves in grief, or in joy, without actively being a part of a community.
What most excites me about theater is the idea that storytelling can foster community. Like the minyan, theater is the antidote to loneliness, demanding that the audience engage in compassion and togetherness to seek meaning. When you’re in a theater, you feel like you’re part of a minyan – a community actively resisting the loneliness of being alive.
So, in what feels like this post-apocalyptic pandemic, how could I find that anti-lonely feeling? How was I to grieve my theatrical minyan without a minyan?
Sure, many theaters, the San Diego REP chief among them, have found incredibly innovative ways to create theatrical experiences online. And I have certainly had some profound experiences creating "theater" on zoom in these bizarre times. But it didn't solve that loneliness. The spiritual practice of exhausted collaborators trying to find their light onstage during tech, the visceral experience of sitting in an audience sobbing next to a total stranger... I can't get that hunched over my computer.

So when Todd Salovey and the Leichtag Foundation initially asked me to co-write and produce "A Drive Through Shushan," I have to admit I was skeptical. An audience watching from their cars? Actors performing the same scene every 15 minutes like theme park characters? It didn't sound like a minyan to me. It sounded like a pale imitation, a painful reminder of what we'd lost.
But showing up double-masked to the Leichtag farm on February 21, 2021 assuaged all of my hypothetical fears. Even from a distance, I observed actors laughing on breaks; our glorious stage manager coordinating with her Mary Poppins bag full of everything we could possibly need; our director giving notes with a passion I hadn't seen in months. I felt the indescribably wonderful feeling of cringing at my own writing and rewriting on the fly. And, for the first time in 362 days, an actor called line.
I learned this convention of calling line at the age of 4, when I first started my theatrical career. It was a small, specific ritual of language that invited me into a long tradition of theatermakers. Over 25 years later, it is now so familiar to me that I take it for granted. It's in my bones, woven into the fabric of my identity. Reciting the Kaddish in a minyan evokes a similar feeling for me – of belonging to my ancestors and to Jewish people around the world.
When rehearsing virtually, an actor doesn't need to call line – they have the pdf of their script right in front of them. So hearing it again after 362 days, I felt an ancient echo calling me home. Sure, we were masked and outside, but we were there, live and together. I found myself back in my theatrical minyan.
The event itself was a fun retelling of the story of Purim, complete with ballet, clowning, and intimate monologues. Even though audiences would sit in the comfort of their cars rather than theater seats, I felt all the familiar opening night jitters: "we're not prepared," "surely something is going to go wrong." But somehow magically, as always happens, the show was a success.
Working in the theater my whole life, that magical, spiritual feeling of togetherness, of creating a temporary minyan, of dozens of people working together to engage in compassion and meaning-making – it's something I took for granted. I promise I won't anymore.