Submissions now being accepted for the 2021 Festival!

Festival passes will be available soon. We highly value the work of our Latinx New Play Festival artists. So that we can continue to support the festival and its artists, we suggest that $50 is a fair value price for this year’s festival pass. However, it is equally important to us that anyone who wants to access the festival and the plays presented is able to do so. Feel free to select a price option, between $0 and $100, that best suits you and your current circumstances. Information on how to view the readings, spotlight performance and other events will be included in your purchase confirmation email.

Curious about how this year's festival will be presented? Click here to watch a short video!

All times listed are PDT.

When his estranged, alcoholic father is diagnosed with liver cancer, computer scientist Jorge dreams up a nursing app to manage the disease in his stead. As the machine's capabilities grow, however, the possibility of leaving it in charge of the treatment becomes more real, forcing Jorge to reckon with his responsibilities as a son—and as a creator.

Francisco Mendoza (Playwright) is an Argentinian writer currently living in Brooklyn, NY after spending several years in Brazil. His work has been developed or presented at The Lark, The New Group, the MacDowell Colony, and Northern Stage, among others. His scripts include stage plays Machine Learning (Neukom Institute Literary Arts Award for Playwriting), Tooth for Tooth (Finalist, Sundance Theater Lab; Finalist, Princess Grace Playwriting Fellowship), and Patriarch; TV pilot Land Most Loved (Finalist, Sundance Lab); and podcast Hairy Legs Hannah's Feminist Quarter-Hour, which he co-wrote and directed after a successful Kickstarter campaign. MFA - Tisch School of the Arts. notrealmendoza.com 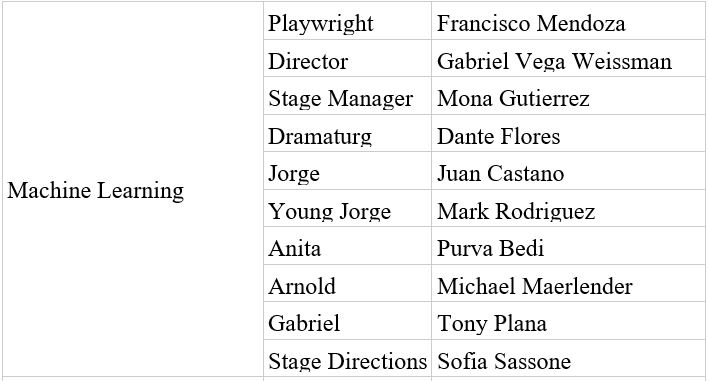 Elsa is a doctor of Primatology who has up-until-now, successfully concealed her diagnosis of Autism. She is currently working at a zoo with an orangutan named Wookie, who she believes is capable of speaking a human language. Elsa’s 12 year old nephew, A.J., is also Autistic, but is unable to communicate verbally. A.J. and Wookie soon discover that they can communicate in mysterious ways, which completely disrupts Elsa’s research and theories. A.J. teaches Wookie that she is mortal and will die someday. This is a brand new concept to the animal, and Wookie falls into despair to the point of near death. Wookie’s death would be catastrophic to Elsa. She is forced to confront the value of A.J.’s mode of communication and her reluctance to embrace her own Autism. 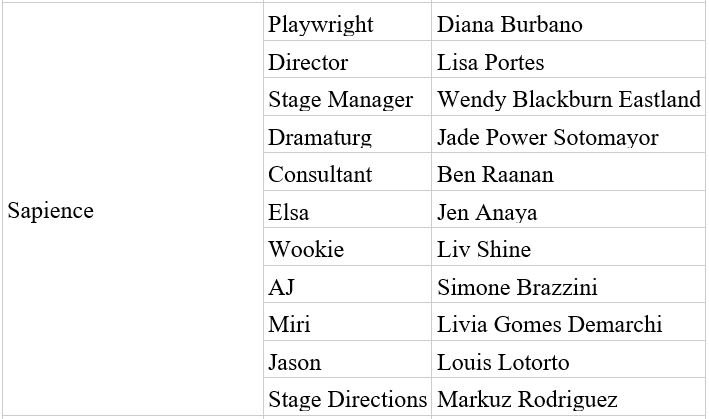 Every year, thousands of families apply for a reality TV show that promises a rags-to-riches transformation for America's most deserving citizens. With such steep competition, the Vega family must fight to make their video application stand out. Makasha Copeland's gritty comedy begs the question - in a world where so many receive so little, how much do miracles cost?

Makasha Copeland (Playwright) is a playwright and comedian whose work focuses on the televisual, Tejano history, and positionality of the audience. Original works include Extreme Home Makeover, an earnest satire that received the 2019 Agnes Nixon award. Copeland’s farce Fabuloso! received a workshopped reading with Vertigo Productions. Additionally, Copeland is a seasoned improviser, performing at Northwestern University with The Titanic Players, Out Da Box, and Mee-Ow, as well as performances at iO and Second City with femme sketch group Resting Witch Face. They are a recent graduate from Northwestern University where they studied Playwriting, Latinx Studies, and majored in Theatre. 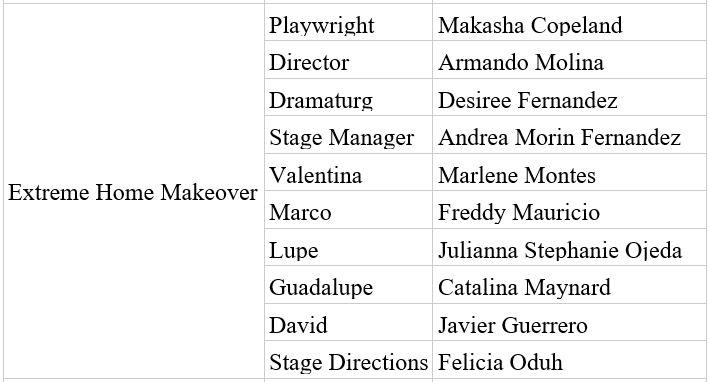 In In Spanking Machine GLAAD Award-winning writer/performer Marga Gomez shifts across gender, latitudes and generations in a darkly comic memoir about the first boy she ever sloppy-kissed and how it made them gay forever. “His real name was Agamemnon Perez Jr. but he shortened it to “Scotty” because he thought Agamemnon sounded too Cuban.” By turns funny and disturbing, Gomez recounts growing up brown and queer in Washington Heights, sadistic nuns on poppers, tender vampires, childhood misdemeanors, parental post-nasal drip, fear, sexual assault and suppressed memory.
Development on Spanking Machine began with Gomez and original director and dramaturg Adrian Alea in March 2019 when it was chosen for residency at Syracuse Stage’s “Cold Read Festival” and continued through 2019 and 2020 with workshops at Elgin Illinois Fringe Festival, and a July 2020  commisioned livestreaming engagement at Dixon Place, NYC. It was also slated for a three week run at Brava Theater, San Francisco which was postponed on opening night due to the pandemic.
"No Zoom window could possibly contain the outsize personality of Marga Gomez" -New York Times

The Cucuy Will Find You

Embedded within Mexican-American folklore, the Cucuy is a dark entity known for eating bad, disobedient people. But what does it mean to be a good person? For a successful 30-something year old, like Rey, the Cucuy could disrupt Rey's life and the very fabric of reality, Rey must prove that they are a good person. But it isn’t easy; Rey avoids travelling to visit their grandmother, Leti, even though Rey’s father insists her health is quickly declining. As Rey tries to affirm the life Rey has built away from home, The Cucuy confronts Rey with the past, present, and future.

Jaymes Sanchez (Playwright) is a Texan playwright and theatre artist. Jaymes's play The Cucuy Will Find You was featured in the Lark's Playwrights' Week 2019 and will be featured in Teatro Vivo’s 2020 Latinx New Play Festival. Soda From Water Cups was a finalist for the Latinx Theatre Commons' 2018 Carnaval of New Latinx work. Who Owns What was featured in Artists’ Theater of Boston’s production of This Place/Displaced. Jaymes was a member of the Company One Playlab in 2018 and 2019. Jaymes is pursuing an MFA in Playwriting at the Michener Center for Writers at the University of Texas at Austin. 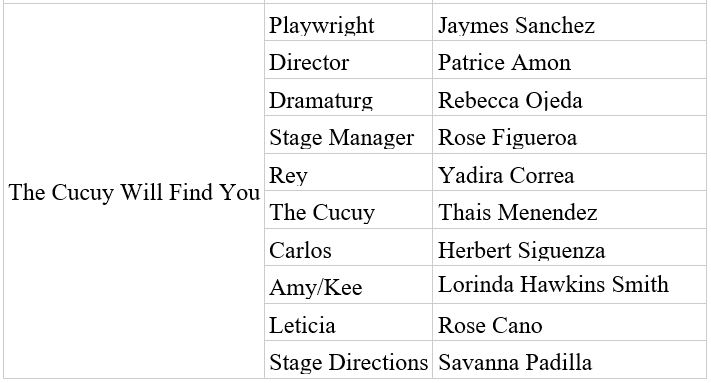 The San Diego REP Latinx New Play Festival, hosted by the Amigos del REP, is a celebration of engaging, dynamic and enlightening new plays by Latinx playwrights from across the United States. Submissions are accepted from Latinx playwrights representing an array of genres, styles and experiences highlighted by both emerging and veteran playwrights.

All artists involved in engagement events are listed below.
Opening Reception:
Stay for informal networking, games, and music. Meet the festival artists and connect with other theatre professionals.

San Diego REP's Latinx New Play Festival is supported in part by an award from the National Endowment for the Arts. 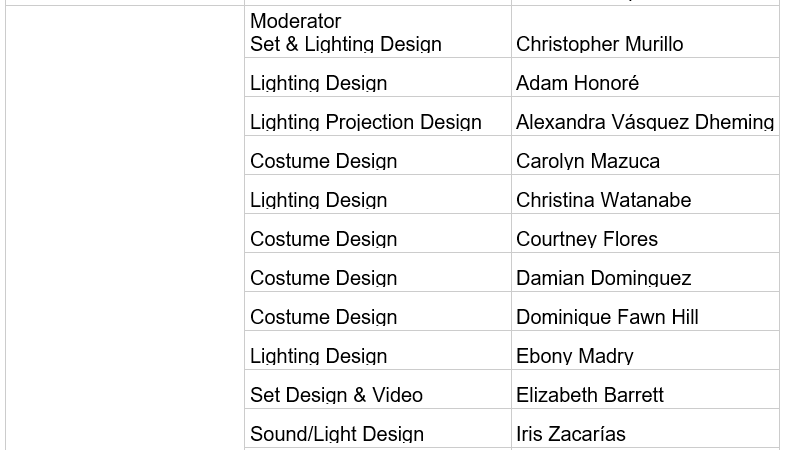 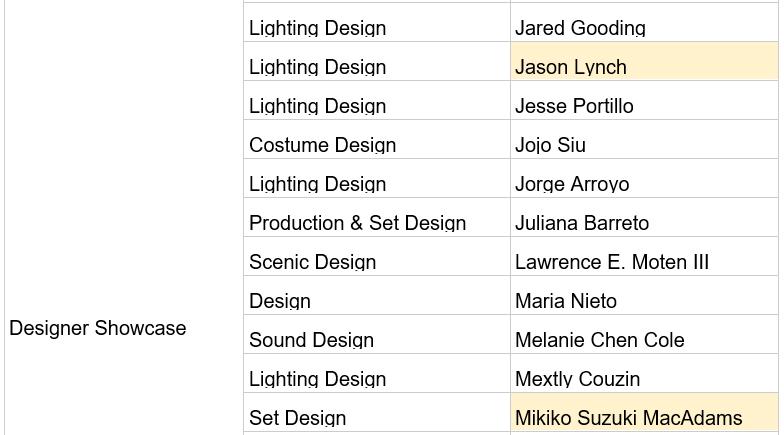 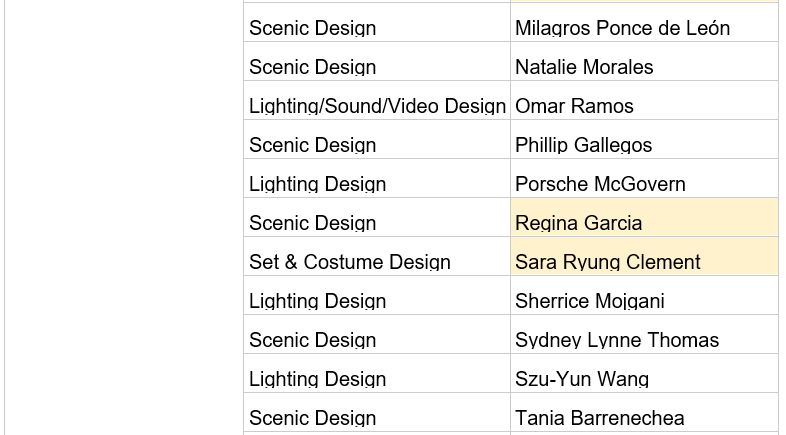 The festival had four readings, a spotlight performance and also a number of ticketed, surround events.

"The Book of Leonidas" by Augusto Amador

"Guadalupe in the Guest Room" by Tony Meneses

San Diego Repertory Theatre and Amigos del REP are proud to announce open submissions to the 2021 Latinx New Play Festival, a weekend of new play readings by Latinx playwrights. The festival will showcase four new Latinx plays by Latinx playwrights. The 2021 Latinx New Play Festival seeks to expand the presence of Latinx stories and artists on the American stage that spotlight the broad range of today’s Latinx experience. The festival will invite artistic directors, literary managers, and producers to attend a weekend of readings showcasing the work of Latinx actors, directors, and designers. Past selections include work by Diana Burbano, Francisco Mendoza, Jaymes Sanchez, and Makasha Copeland. The festival will take place in a hybrid virtual and in-person format, depending on health and safety guidelines. In-person components will occur at The Lyceum Theatres in Horton Plaza.

Four scripts will be selected to be rehearsed over the course of one week, resulting in a public music-stand reading. Readings will be rehearsed early August 2021; combined rehearsal and performance will not exceed 29 hours. Each selected script will be assigned a local Latinx director and actors (unless otherwise indicated by the script).

Festival submissions are open to self-identifying Latinx playwrights living in the United States. Scripts may be in English or English with some Spanish or another Language (scripts with a language other than English must be accompanied by an English translation).

Plays must be unpublished, professionally unproduced, and not currently under option at the time of submission. University productions or other non-professional workshops/productions will not  disqualify a script.

At this time, only full length (at least 80 minutes), non-musicals, with cast size under eight will be considered. Plays with music will be considered as resources allow (cast-size less eight and under, piano only). Solo pieces will also be considered. Submissions are limited to one script per playwright.

A selection committee of San Diego Rep Artistic staff and Artistic Director, and Amigos del Rep readers will make recommendations and final selections. Selection will be based upon:

All applicants must complete the following two steps:

Hard copies will not be accepted. PDF documents are strongly recommended to avoid formatting discrepancies.

Selected playwrights will be notified via email by May 1, 2021.